Here is a radiograph of a tooth which shows some radiolucency distally (to the right). Next to it is an occlusal view.

You can magnify many of the pictures on this page by clicking them - look for the icon at the picture bottom-right. 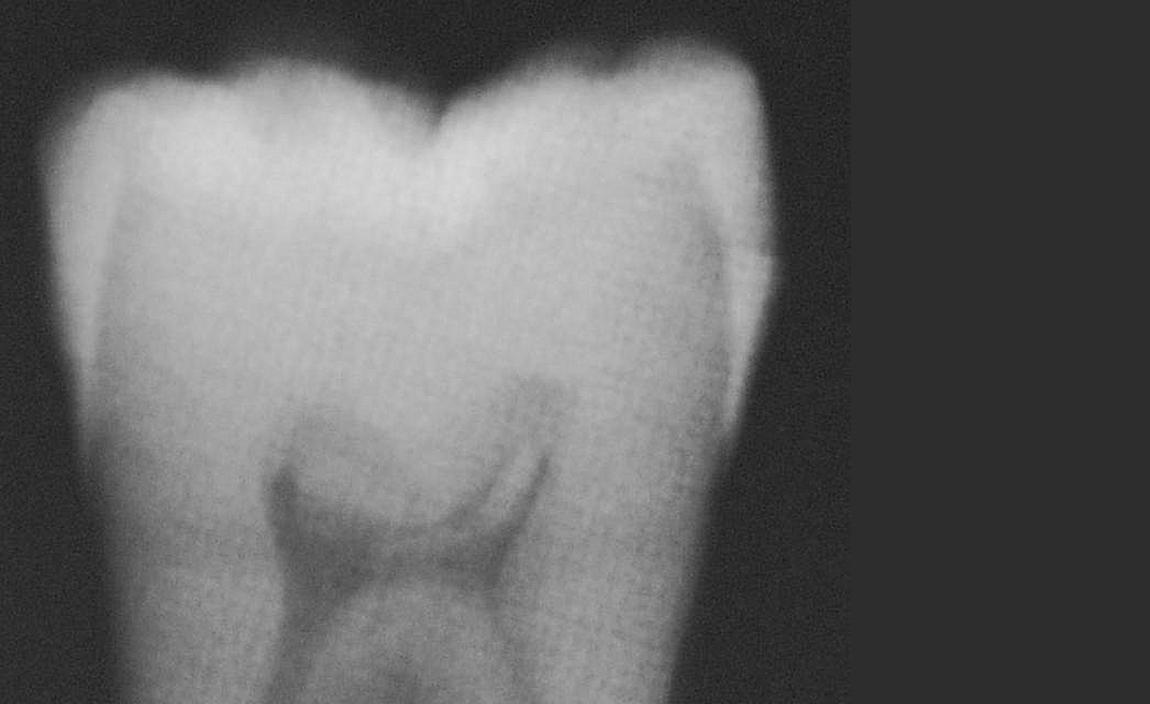 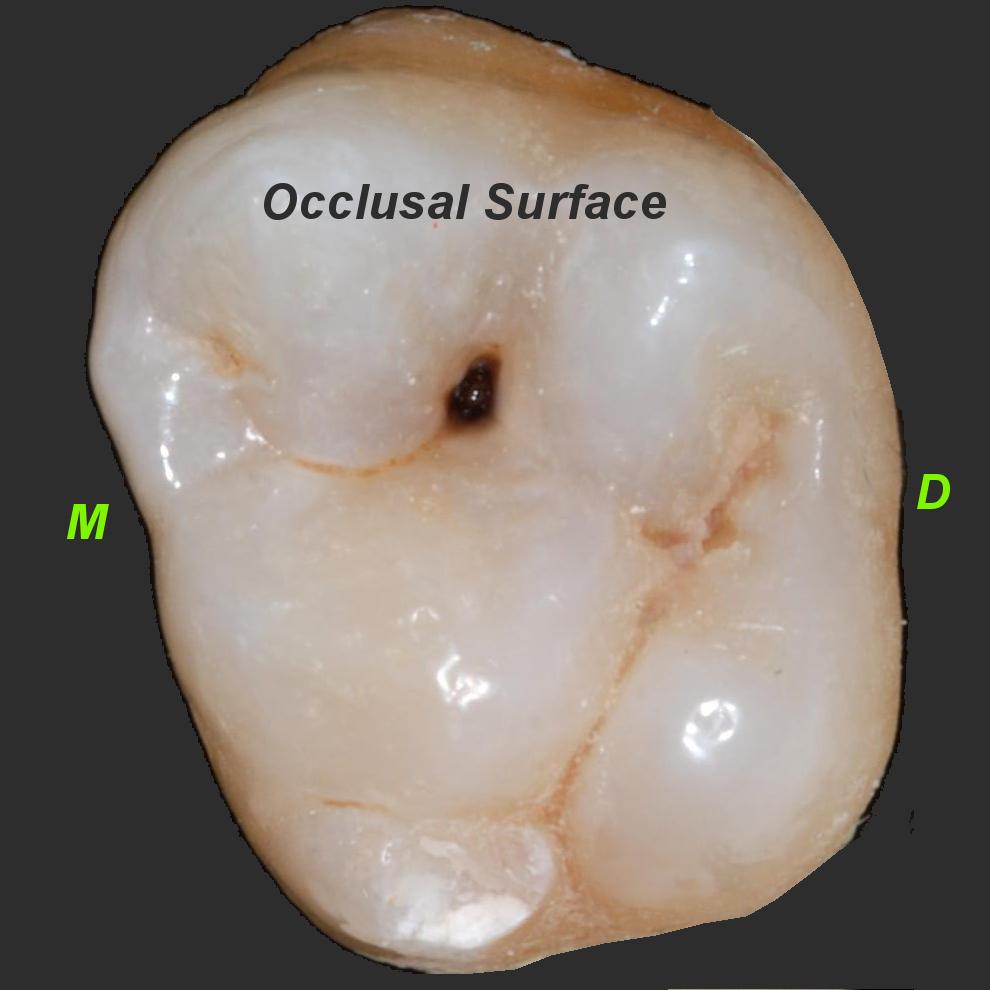 On this evidence alone, would you restore the tooth, or apply preventive measures such as topical fluoride, Diet Advice, and Oral Hygiene Instruction?

Difficult to say. We reckon there would be a 50:50 split between the decisions of a group of clinicians.
No discolouration is visible through the enamel on the occlusal view, and although there appears to be some enamel and dentine demineralisation, there is no obvious cavitation on the radiograph.


What instrument might be helpful in determining if there is a cavity here, and why?


A contra-angled probe (Briault Probe). Because caries starts below the contact point (not on it), this hooked probe should be able to feel if there is cavitation present.
It is important to feel with it gently, so as not to damage decalcified but intact enamel. 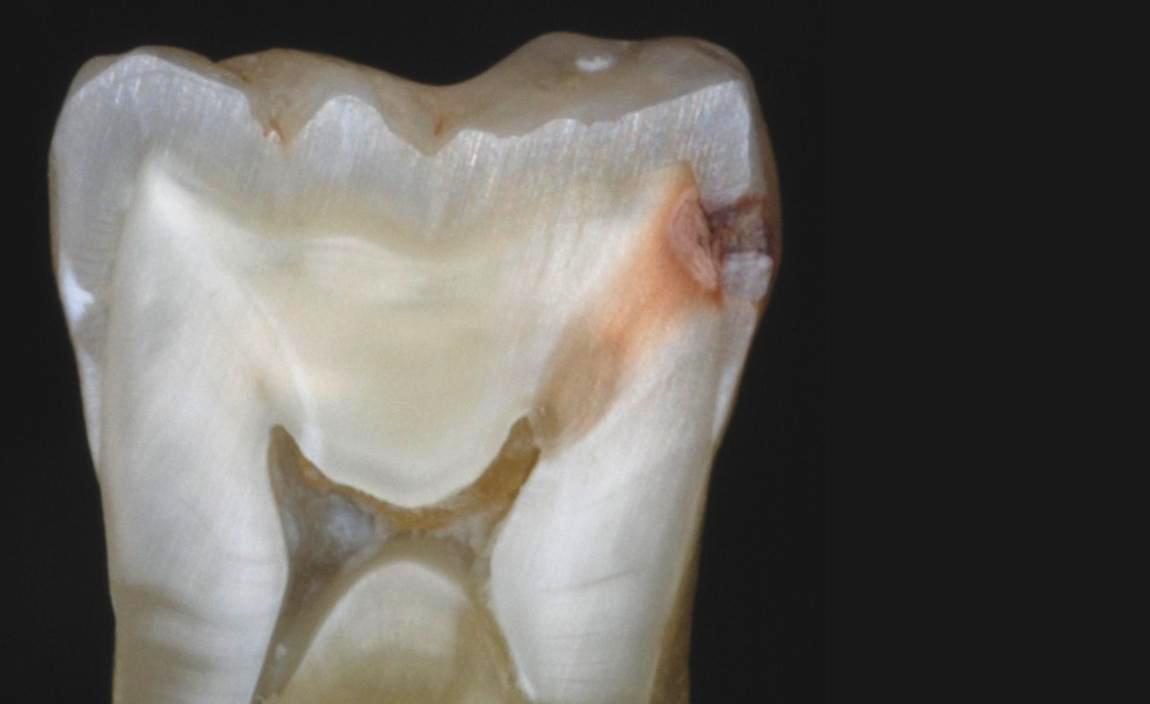 Can you identify the area covered by each of the Zones?

With rapid caries, this zone is soft and yellow. With slowly progressing caries, it is harder and browner. This region is easily removed with an excavator.

Zone of Bacterial Invasion
The tubules are invaded by bacteria, which then multiply within the tubule lumen. As well as decalcifying the dentine with acid, the bacteria dissolve the proteins (like collagen) within the tubules. This is called proteolysis. This region can be removed by a rose-head bur, gentle pressure running slowly.


Zone of Demineralisation
Acid produced by the bacteria travels down the dentinal tubules, causing demineralisation. The zone of demineralisation is the advancing front of the carious lesion, and may be very small (less than 1mm). Dentine is relatively easily dissolved/demineralised by acid, at pH 6.7. It is important to note that there are no bacteria in this region.

Clinically, it is very difficult to tell by feel or appearance where the Zone of Bacterial Invasion stops, and the Zone of Demineralisation starts. However, Caries-Indicator Dyes will show which zone you are in.


Sclerotic (Translucent) Zone
A defence reaction occurs within the tubules when acid initially starts to penetrate them. The (live) odontoblast processes start to lay down calcification within the tubules, and they become plugged with mineral deposits. This helps to slow down the acid advance, giving the pulp some protection from the acid.

Occasionally this zone of tubular sclerosis can be seen on radiographs as a radio-dense (whiter) area below the caries, because of the extra mineralisation.


Tertiary Dentine (Reactive Dentine)
When the pulp is mildly inflamed by advancing acid, it produces tertiary dentine in an attempt to wall off the insult.

Finally, here is a picture of the distal lesion itself. Although the radiograph didn't show much, cavitation is clearly visible (click to magnify). Note the cavity is below the contact point, so accessible to a contra-angled probe. 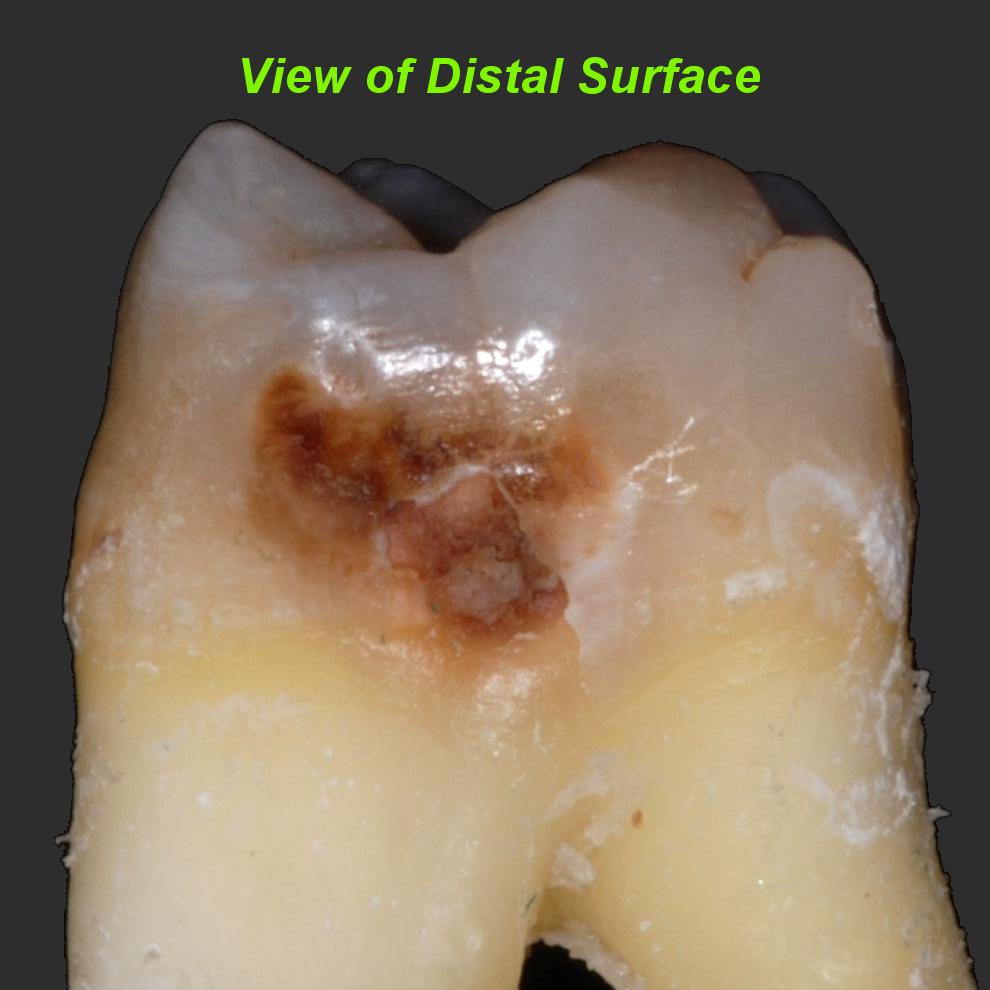 How much to remove?

Traditionally, when preparing a cavity for restoration, dentists would (attempt to) remove the Zone of Destruction and the Zone of Bacterial Invasion, rendering the cavity free of bacteria before filling it. Work by Edwina Kidd and others suggests that this may not always be necessary: if the infected zone is well sealed - or entombed - by a restoration, caries progression will halt. However, if the seal should fail in years to come, it will rapidly re-start.

If you adopt this "seal and monitor" philosophy, you must also make a clinical decision about whether to remove the Zone of Destruction: in stress-bearing situations restorative materials need to sit on firm dentine. If the restoration is not stress bearing (for example buccal caries), leaving part of the Zone of Destruction may be justifiable.

Please note that the "seal and monitor" approach requires very careful patient selection if it is to succeed.

More Clinical Examples
Have a look at these pictures (click to magnify). Try to decide where the zones are. Do they need operative restoration? How much preparation you would do prior to restoration? Do the radiographs accurately reflect the position and extent of the decay?

We hope you have enjoyed this "clinical" look at caries pathology. Radiographs can show the presence of caries, but can be unhelpful for establishing its extent, and whether or not operative intervention is needed. Also, they may not show caries when it in fact exists.

When there is doubt interproximally, always inspect the region for cavitation with a (contra-angled) probe first. Other aids to diagnosis include direct vision on the dried tooth, and electronic caries indicating devices like the Diagnodent.

It has to be the best value CPD around, and probably the most useful. Many thanks.
WK