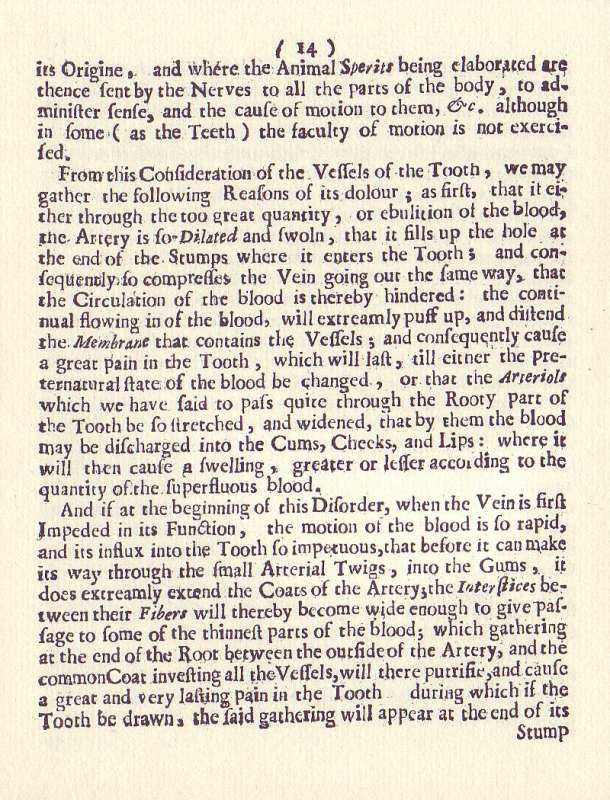 its Origin, and where the animal spirits being elaborated are thence sent by the Nerves to all parts of the body, to administer sense, and the cause of motion to them etc., although in some (as the teeth) the faculty of motion is not exercised.
From this consideration of the vessels of the tooth, we may gather the following resons of its dolour; as first, that it either the too great quantity, or ebullition of the blood, the artery is so dilated and swollen that it fills up the hole at the end of the stumps where it enters the tooth; and consequently so compresses the vein going out the same way, that the circulation of the blood is thereby hindered: the continual flowing in of the blood , will extremely puff up and distend the membrane that contains the vessels; and consequently cause a great pain in the tooth, which will last until either the preternatural state of the blood be changed, or that the arteriole that we have sais to pass quite through the rooty part of the tooth be so stretched, and widened, that that by them the blood may be discharged into the Gums, Cheeks, and Lips: where it will then cause a swelling, greater or lesser according to the quantity of superfluous blood.
And if at the beginning of this Disorder, when the vein is first impeded in its function, the motion of the blood is so rapid, and its influx into the tooth so impetuous, that before it can make its way through the small arterial twigs, into the Gums, it does extremely extend the coats of the artery, the interstices between their fibres will thereby become wide enough to give passage to some of the thinnest parts of the blood; which gathering at the end of the root between the outside of the artery, and the common coat investing all the vessels, will there putrify, and cause a great and very lasting pain in the tooth during which if the tooth be drawn, the said gathering will appear at the end of its