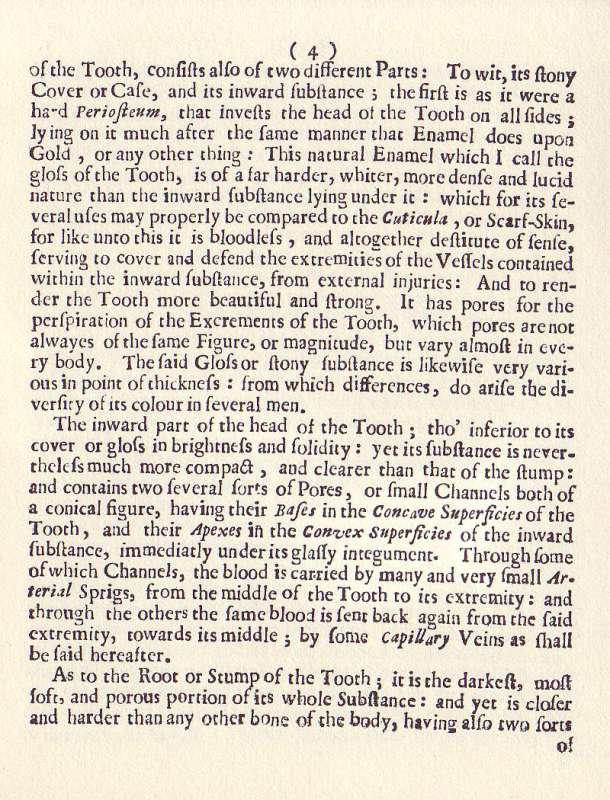 of the tooth, consists also of two different parts: To wit, its stony cover or case, and its inward substance; the first is as it were a hard Periosteum, that invests the head of the tooth on all sides; lying on it much after the same manner that Enamel does upon gold, or any other thing; This natural enamel which I call the gloss of the tooth, is of a far harder, whiter, more dense and lucid nature that the inward substance lying under it: which for its several uses may properly be compared to the Cuticula, or Scarf-Skin, for like unto this is it bloodless, and altogether destitute of sense, serving to cover and defend the extremities of the vessels contained within the inward substance, from external injuries: And to render the tooth more beautiful and strong. It has pores for the perspiration of the excrements of the tooth, which pores are not always of the same figure or magnitude, but vary almost in every body. The said gloss or stony substance is likewise very various in point of thickness: from which differences do arise the diversity of its colour in several men.
The inward part of the head of the tooth; though inferior to its cover or gloss in brightness and solidity: yet its substance is nevertheless much more compact, and clearer than that of the stump: and contains several sorts of pores, or small channels both of a conical figure, having their bases in the concave superficies of the tooth, and their apexes in the convex superficies of the inward substance, immediately under its glassy integument. Through some of which channels, the blood is carried away by many and very small arterial sprigs, from the middle of the tooth to its extremity: and through the others the same blood is sent back again from the said extremity, towards its middle; by some capillary veins as shall be said hereafter.
As to the root or stump of the tooth; it is the darkest, most soft, and porous portion of its whole substance: and yet it is closer and harder than any other bone of the body, having also two sorts

Thought provoking, and good reminder of what we should know.
FC