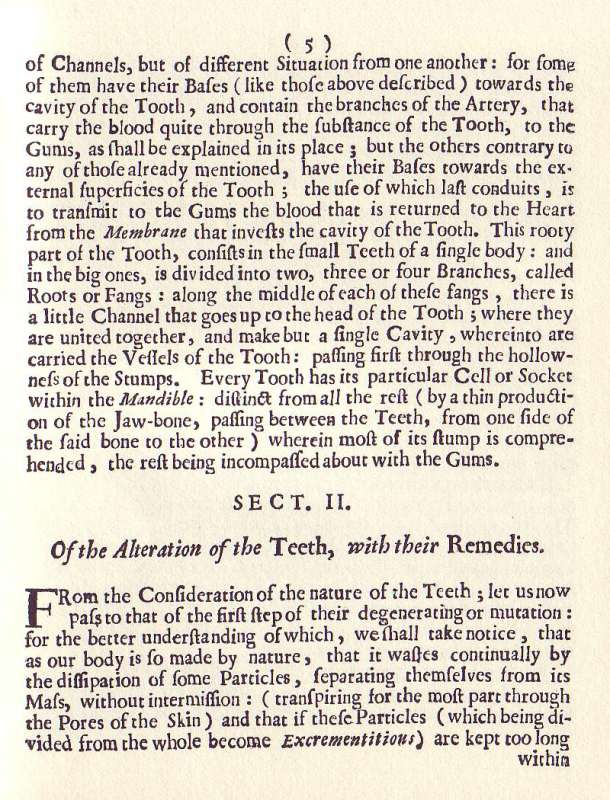 of channels, but of different situation from one another: for some of them have their bases (like those above described) towards the cavity of the tooth, and contain the branches of the artery, that carry the blood quite through the substance of the tooth, to the gums, as shall be explained in its place; but the others contrary to any of those already mentioned, have their bases towards the external superficies of the tooth; the use of which last conduits, is to transmit to the gums the blood that is returned to the heart from the membrane that invests the cavity of the tooth. This rooty part of the tooth, consists in the small teeth of a single body: and in the big ones is divided into two, three or four branches, called roots or fangs: along the middle of each of these fangs, there is a little channel that goes up to the head of the tooth; where they are united together, and make but a single cavity, whereinto are carries the vessels of the tooth: passing first through the hollowness of the stumps. Every tooth has its particular cell or socket within the mandible: distinct from all the rest (by a thin production of the jaw-bone, passing between the teeth, from one side of the said bone to the other) wherein most of the stump is comprehended, the rest being incompassed about with the gums.

Of the Alteration of the Teeth, with their Remedies.

From the consideration of the nature of the teeth; let us now pass to that of the first step of their degeneration or mutation: for the better understanding of which, we shall take notice, that as our body is so made by nature, that it wastes continually by the dissipation of some particles, separating themselves from its mass, without intermission: (transpiring for the most part through the pores of the skin) and that if these particles (which being divided from the whole become excrementation) are kept too long

Dentaljuce is brought to you by the award winning Masters team from the School of Dentistry, University of Birmingham, UK. All have won awards for web based learning and teaching and are recognised as leaders and innovators in this field, as well as being highly experienced clinical teachers.

With universities closing their doors, many students are currently having to rely more on online resources. If you are a student, and you don't need CPD Certificates, we are offering an amazing discount on your Dentaljuce personal membership fee. Special student price just £19 for 12 months individual membership.

Very impressed - keep being interrupted by patients turning up!
JW