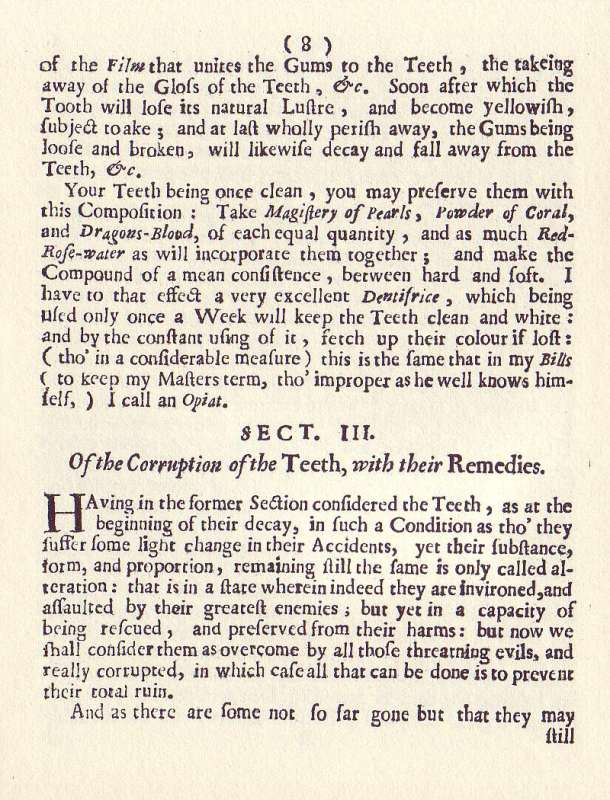 of the Film that unites the Gums to the Teeth , the taking away of the Gloss of the Teeth, etc. Soon after which the Tooth will lose its natural Lustre , and become yellowish, subject to ache ; and at last wholly perish away, the Gums being loose and broken, will likewise decay and fall away from the Teeth, etc.
Your Teeth being once clean , you may preserve them with this Composition : Take Magistery of Pearls, Powder of Coral, and Dragons-Blood, of each equal quantity, and as much Rose-water as will incorporate them together ; and make the Compound of a mean consistence , between hard and soft. I have to that effect a very excellent Dentrifice, which being used only once a Week will keep the Teeth clean and white : and by the constant using of it , fetch up their colour if lost : ( tho' in a considerable measure ) this is the same that in my Bills ( to keep my Masters term, tho' improper as he well knows himself, ) I call an Opiat.

Of the Corruption of the Teeth, with their Remedies.

Having in the former Section considered the Teeth , as at the beginning of their decay, in such a Condition as tho' they suffer some light change in their Accidents, yet their substance, form, and proportion, remaining still the same is only called alteration: that is in a state wherein indeed they are invironed, and assaulted by their greatest enemies ; but yet in a capacity of being rescued , and preserved from their harms: but now we shall consider them as overcome by all those threatening evils, and really corrupted, in which case all that can be done is to prevent their total ruin.
And as there are some not so far gone but that they may