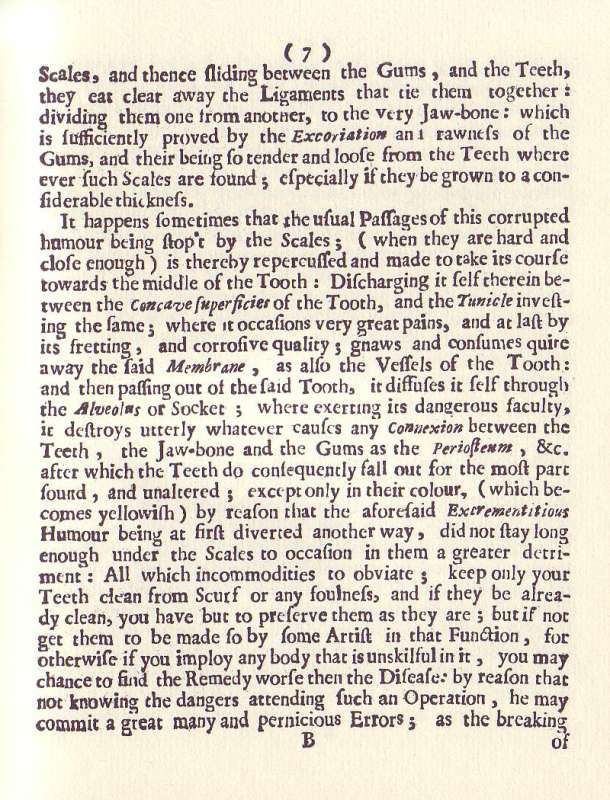 scales, and thence sliding between the Gums , and the Teeth, they eat clear away the Ligaments that tie them together : dividing them one from another, to the very Jaw-bone : which is sufficiently proved by the Excoriation and rawness of the Gums, and their being so tender and loose from the Teeth where ever such Scales are found ; especially if they be grown to a considerable thickness.
It happens sometimes that the usual passages of this corrupted humour bring stopped by the Scales ;( when they are hard and close enough ) is thereby repercussed and made to take its course towards the middle of the Tooth : Discharging itself therein between the concave superficies of the Tooth, and the Tunicle investing the same; where it occasions very great pains, and at last by its fretting , and corrosive quality ; gnaws and consumes quite away the said membrane , as also the Vessels of the Tooth : and then passing out of the said Tooth, it diffuses itself through the Alveolus or Socket ; where exerting its dangerous faculty, it destroys utterly whatever causes any connection between the Teeth , the jaw-bone and the Gums as the Periosteum , etc. after which the Teeth do consequently fall out for the most part found , and unaltered ; except only in their colour, ( which becomes yellowish ) by reason that the aforesaid Excrementitious Humour being at first diverted another way, did nor stay long enough under the Scales to occasion in them a greater detriment : All which incommodities to obviate ; keep only your Teeth clean from Scurf or any foulness, and if they be already clean, you have but to preserve them as they are ; but if not get them to be made so by some Artist in that Functon , for otherwise if you employ anybody that is unskilful in it, you may chance to find the Remedy worse then the Disease: by reason that not knowing the dangers attending such an Operation , he may commit a great many and pernicious Errors ; as the breaking