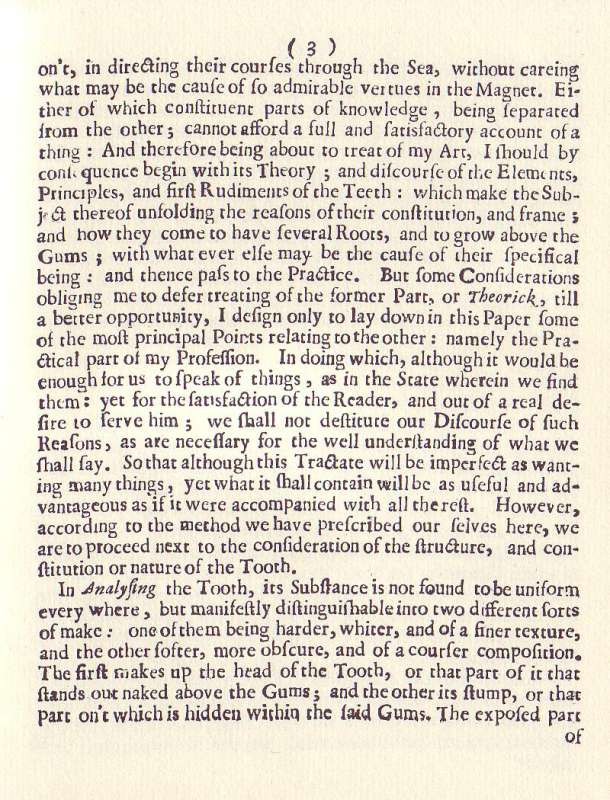 of it, in directing their courses through the sea, without caring what may be the cause of so admirable virtues in the magnet. Either of which constituent parts of knowledge, being separated from the other; can not afford a full and satisfactory account of a thing: And therefore being about to treat of my art, I should by consequence begin with its theory; and discourse of the elements, principles, and first rudiments of the teeth: which make the subject thereof unfolding the reasons of their constitution, and frame; and how they come to have several roots, and to grow above the gums; with whatever else may be the cause of their special being: and thence pass to the practice. But some considerations obliging me to defer treating of the former parts, or Theorick, till a better opportunity, I design only to lay down in this paper some of the most principal points relating to the other: namely the practical part of my profession. In doing which, although it would be enough for us to speak of things, as in the state wherein we find them: yet for the satisfaction of the reader, and out of a real desire to serve him; we shall not destitute our discourse of such reasons, as are necessary for the real understanding of what we shall say. So that although this Tractate will be imperfect as wanting many things; yet what it shall contain will be as useful and advantageous as if it were accompanied with all the rest. However, according to the method we have prescribed ourselves here, we are to proceed next to the consideration of the structure, and constitution or nature of the tooth.
In analysing the tooth, its substance is not found to be uniform everywhere, but manifestly distinguishable into two different sorts of make: one of them being harder, whiter, and of a finer texture, and the other softer, more obscure, and of a coarser composition. The first makes up the head of the tooth, or that part of it that stands out naked above the gums; and the other its stump, or that part of it which is hidden within the said gums. The exposed part

This is the Catherine Deneuve of online dentisty.
MF