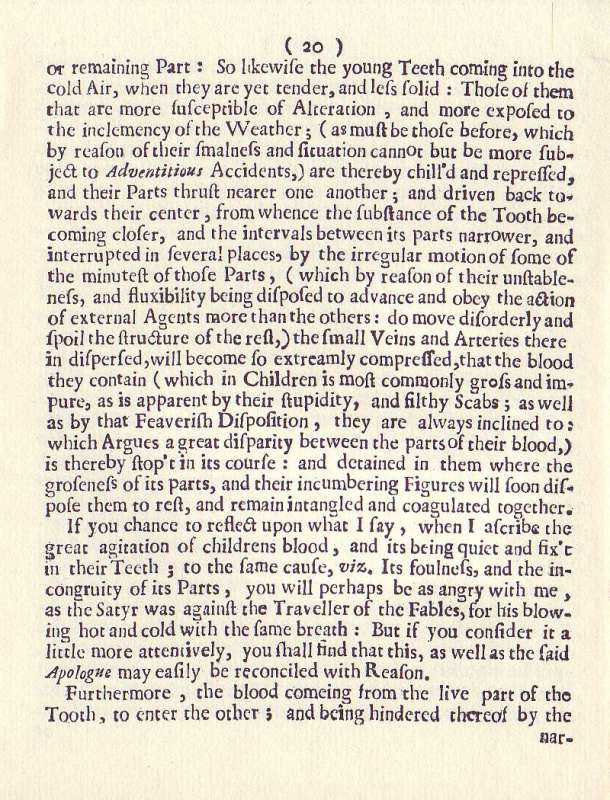 or remaining part: So likewise the young teeth coming into the cold air, when they are yet tender, and less solid: Those of them that are more susceptible of alteration, and more exposed to the inclemency of the weather; (as must be those before, which by reason of their smallness and situation cannot but be more subject to adventitious accidents,) are thereby stilled and repressed, and their parts thrust nearer one another; and driven back towards their centre, from whence the substance of the tooth becoming closer, and the intervals between its parts narrower, and interrupted in several places, by the irregular motion of some of the minutest of those parts (which by reason of their unstableness, and fluxibility being disposed to advance and obey the action of external agents more than others: do move disorderly and spoil the structure of the rest,) the small veins and arteries therein dispersed, will become so extremely compressed, that the blood they contain (which in children is most commonly gross and impure, as it apparent by their stupidity, and filthy scabs; as well as by that feverish disposition, they are always inclined to: which argues a great disparity between the parts of their blood,) is thereby stopped in its course: and detained in them where the grossness of its parts, and their encumbering figures will soon dispose them to rest, and remain entangled and coagulated together.
If you chance to reflect upon what I say, when I ascribe the great agitation of children’s blood, and its being quiet and fixed in their teeth; to the same cause, viz. Its foulness, and the incongruity of its parts, you will perhaps be angry with me, as the Satyr was against the Traveller of the Fables, for his blowing hot and cold with the same breath: But if you consider it a little more attentively, you shall find that this, as well as the said Apologue may easily be reconciled with the reason.
Furthermore, the blood coming from the live part of the tooth, to enter the other; and being hindered thereof by the