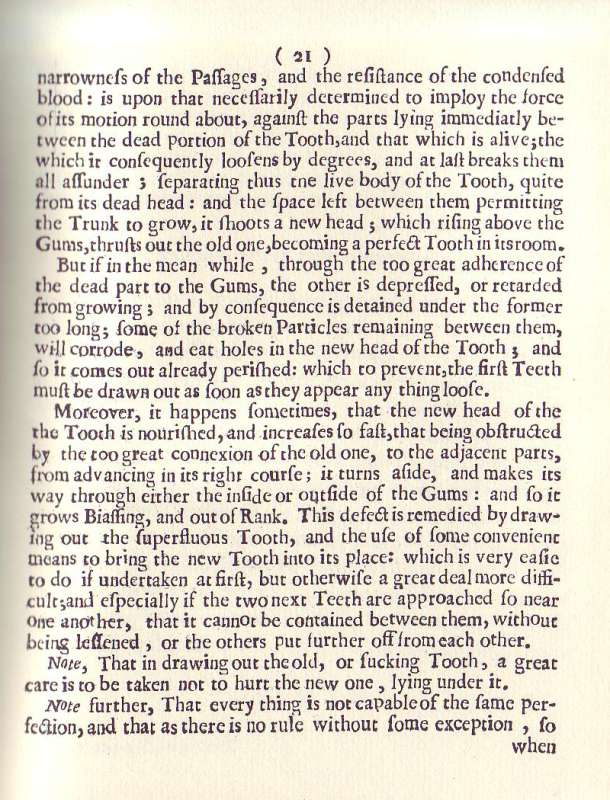 narrowness of the passages, and the resistance of the condensed blood: is upon that necessarily determined to employ the force of its motion round about, against the parts lying immediately between the dead portion of the tooth, and that which is alive; the which it consequently loosens by degrees, and at last breaks them all asunder; separating thus the live body of the tooth, quite from its dead head: and the space left between them permitting the trunk to grow, it shoots a new head; which rising above the gums, thrusts out the old one, becoming a perfect tooth in its room.
But if in the meanwhile, through the too great adherence of the dead part to the gums, the other is depressed, or retarded from growing; and by consequence is detained under the former too long; some of the broken particles remaining between them, will corrode, and eat holes in the new head of the tooth; and so it comes out already perished: which to prevent, the first teeth must be drawn out as soon as they appear any thing loose.
Moreover, it happens sometimes, that the new head of the Tooth is nourished, and increases so fast, that being obstructed by the too great connection of the old one, to the adjacent parts, from advancing in its right course; it turns aside, and makes its way through either the inside or outside of the gums: and so it grows biasing, and out of rank. This defect is remedied by drawing out the superfluous tooth, and the use of some convenient means to bring the new tooth into its place: which is very easy to do if undertaken at first, but otherwise a great deal more difficult; and especially if the two next teeth are approached so near one another, that it cannot be contained between them, without being lessened, or the others being put further off from each other.
Note, That in drawing out the old, or sucking tooth, a great care is to be taken not to hurt the new one, lying under it.
Not further, That every thing is not capable of the same perfection, and that as there is no rule without some exception, so